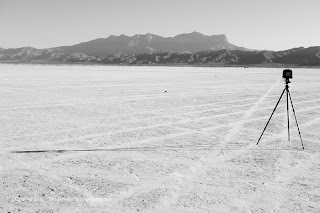 On the salt flats of west Texas.


Here is another shot taken on the salt flats west of the Guadalupe Mountains.  Here I tried to capture the full shadow of the camera as well as the mountains.


Taken with my Panasonic LX3.  Small Format taking a picture of my Large Format.

Posted by Darren Huski at 4:43 PM No comments:

The Salt Flats and Guadalupes 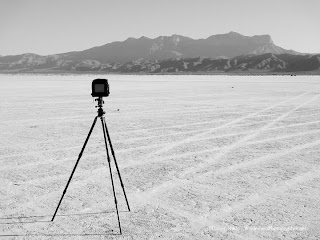 On a clear October morning I arrived at the Guadalupe Mountains in far west Texas.  Not a cloud was to be seen in the sky, however the early light had a crisp brightness to it.  So I made my way west of the park to the salt flats there and took the 4x5 far out across them and started to photographing in black and white to see if I could capture the flat white slat plain and the distant peaks.


As usual I could not resist photographing the camera on location and think the images of the camera on the salt flats might be better than the images I made with it.
Posted by Darren Huski at 11:33 AM No comments: 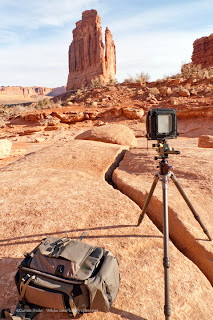 One from Arches National Park from atop the forge rock.

Well this rock does not really have a name, but I call it that. Every since I first looked at it in 2002 I knew it could be a place for a neat image. I have tried a few different times and even though I have yet to get the image I think I can get I have had fun trying.

Here is from my last visit on an afternoon with just enough clouds to give B+W a try. I have framed up the crack and rocks with my 75mm wide angle. It is locations like this I sure wish I had a 47XL.

See my night attempt on my Wilderness Photographer blog.

Rock at Night
Posted by Darren Huski at 10:05 AM No comments: 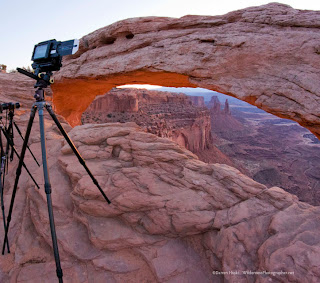 Going for the glow at the incredible Mesa Arch.
The sunrise glow on a clear day at Mesa arch is fantastic. It is one of those things a photographer needs to experience.
Sure it gets crowded but the glow and the view are awesome.
Here I am set up with my shot trying to capture that glow. The shot I am going for is another attempt to make a better version of the title page image of my WildernessPhotographer blog. See link to the left.
Posted by Darren Huski at 7:58 PM No comments: 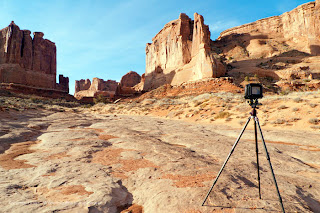 Looking up Park Avenue toward the fins and rocks of Wall Street in Arches National Park.
The classic view is from the other end but I always liked hiking in from the bottom and seeing it in a way most people do not.
It is a classic short hike and easy on top of that. 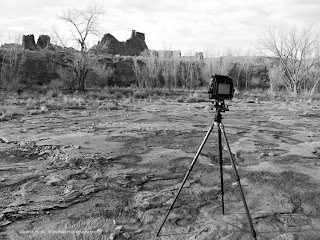 During a mid morning in Arches National Park, I went out in search of black and white images. I spent some time chasing big rocks but then found Courthouse Wash with it's cottonwood trees and decided to give it a try.
I liked the rocks and the branches with the clouds in the sky. Walked around the creek bed rocks until I found the right angle and went to work.
Posted by Darren Huski at 7:46 AM No comments:

On the Edge of a Canyon 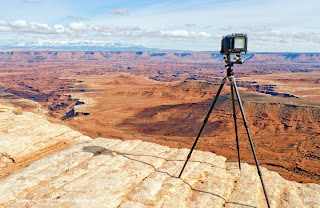 Taking in the view on the east rim of Island in the Sky in Canyonlands National Park.
On an afternoon with decent clouds I decided to do some black and white, here is one of the locations, right on the edge.
Before you ask, it was a still day.........In a wind, I would not be that close but on a still day. It really goes back to being at the Grand Canyon once, having my tripod back 2 feet from the edge of the abyss, and having someone stand in front of me.
So getting to the edge solves that problem.
Posted by Darren Huski at 8:58 PM No comments: 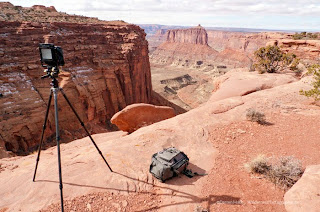 I returned to Canyonlands National Park this last February to take in the red rock country in winter. Last year I saw quite a bit of snow at Monument Valley and the Grand Canyon. I was hoping for a repeat, however this is more of what I saw.
Thats ok, because I got some great light and sky making it an even better trip than my last visit here in 2008.
Here I am set up in the Island in the Sky section of Canyonlands.
Posted by Darren Huski at 4:43 PM No comments: 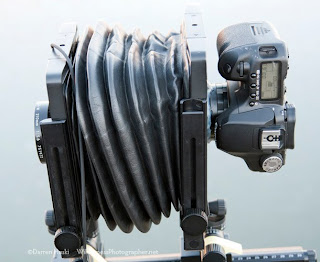 I did an experiment recently to see if I could use my DSLR with my view camera.
I have seen the digital scanning backs or medium format digital backs people have purchased but the several kilobuck price tags places them clearly out of my budget.
Then I saw that some people were buying adapters to allow the use of their DSLR with their view camera. The price was only a couple of hundred, so it was of more real potential.
Then the brainstorm happened....
The modular nature of an Arca-Swiss camera means the ground glass uses the same frame as a lensboard. Meaning I thought I could mount the camera to a flat lens board and use it in place of the ground glass. 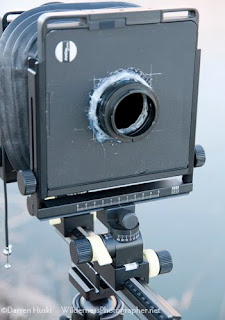 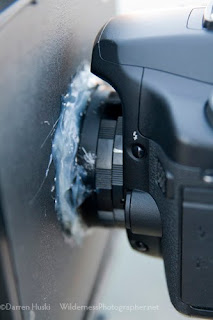 I was able to use both my 210mm and 125mm lens. Although it was a squeeze to make the 125mm work and in this setup anything shorter was out of the question. Remember since I am using the DSLR sensor the lenses act like they would on the DSLR too. So 125mm is slightly wide on the 4x5 but fairly long on the DSLR.
I was still using the large format lenses, still setting the aperture on them, still using movements too. I had just replaced film with a digital sensor. Albeit, a tiny one.
By using Aperture Priority mode on the camera plus live view, it was easy to focus and the camera could still get the exposure!
Images were sharp and had good color.
This not only worked, it had potential.
Then I expanded into what I was really hoping to do-use the movement features of the camera to stitch images into panoramas. 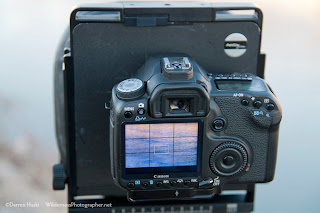 That was when I found the limits.
The Arca-Swiss model I have-the Discovery has all that Arca modularity but it also has friction movements.
Meaning that to shift, I have to loosen a knob, slide the frame, and retighten the knob. What I found was there was ever so slight focus shift when I did that.
So the stitching of panos was lost. Or at least I found it was much easier just to hand hold and use the DSLR as opposed to using the view camera and DSLR to try to stitch.
So an experiment that kinda worked. 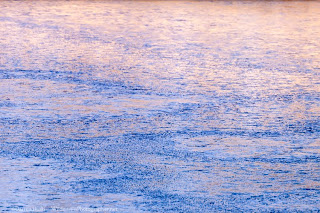 I can use it and get an image. however I think you would need a camera with geared movements to take advantage of the shift and stitch.
So the merger of digital and large format is still not happening for me. I'll just do hand held stitches with the DSLR and stick to film with the view camera.
Posted by Darren Huski at 9:33 AM 2 comments: 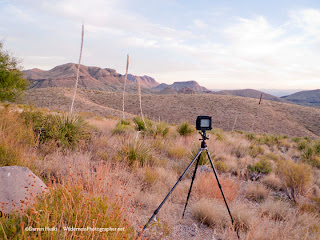 Sotol Vista is an overlook in Big Bend National Park that is the premier place in the park to watch the sunset.
On my last trip there I, of course, had to go there for at least one sunset. I ended up picking the best possible day as it had the best clouds of the entire trip.
The main view is obviously west. This is looking south. You can see the sotol-a yucca plant, and the distant desert mountains.
The rocks, yucca, ridges, and sky all made for a great composition I set up to work the scene in both black and white as well as color with the sunset.
Posted by Darren Huski at 6:38 AM No comments:

On the Rio Grande 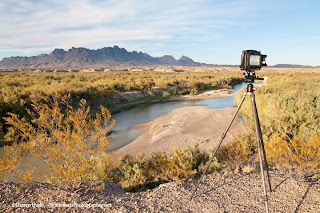 Along the Rio Grande in Big Bend National Park.
I spent a week this fall on Big Bend and one of the highlights of the trip was driving the River Road and photographing along it for three days.
Here is the view from one of my camps. This is on a small bluff overlooking the river. There is not another person for many miles and the view is amazing-desert, river, and mountains.
Follow more of my travels in Big Bend in my Wilderness Photographer blog linked to the right.
Posted by Darren Huski at 6:15 AM No comments:

All text and images are copyright of Darren Huski.
All rights reserved.