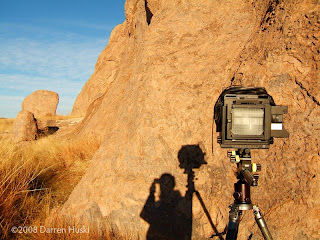 Shadows on the rocks at City of Rocks State Park, New Mexico.

On a trip to El Paso I made a swing into New Mexico and up through Deming. I ended up at City of Rocks since it sounded like a neat place to look around for images.

Sure enough there are a lot of rocks just sitting there on the ground. I spent a few hours scrambling in and around them.

I only made a few images in the harsh light but I tried to make use of the shapes and texture to bring an image to life. Here is one wavy rock with some nearby boulders.


Posted by Darren Huski at 5:59 PM No comments: 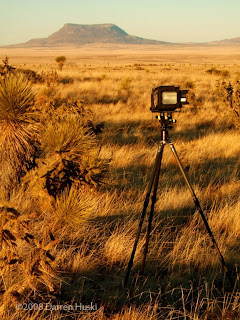 East of El Paso, where the Hueco Mountains fade off into grasslands is a place of big views. One can easily see the Guadalupes which are 75+ miles away. One also sees several volcanic peaks that dot the open range.

One of those has a flat top, that is Alamo Mountain. This peak is actually in New Mexico and is part of the Cornudas Range which straddles both side of the state line. It is a range that keeps drawing my interest on any trip to El Paso or the Guadalupes. It is a place I plan to visit to explore soon.

This image is late the the afternoon. there is a little haze in the air and the sky is clear. I made a couple of images of Alamo Mountain and then watched the sunset while thinking about a new destination.

Posted by Darren Huski at 9:55 AM No comments: 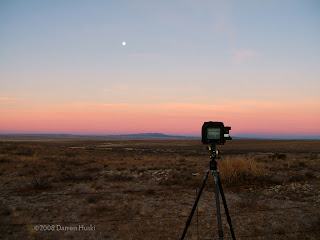 The full moon hanging over the open plains of New Mexico.

On a mostly clear morning north of Deming I could see the early light in the east and the moon in the west. As the morning got closer the sky in the west took on a pink glow. I set up an image where I could look across the open range and see the moon too.

The simplicity of the open grasslands colorful band in the sky and moon hanging above it all made a nice view and one to be put on film.

I went with a moderate wide lens. Not to wide but not too long, showing the scene closer to "normal" seemed right.

And who says you cannot make a nice image on a clear day?
Posted by Darren Huski at 7:29 AM No comments:

Windmill on the New Mexico Plains 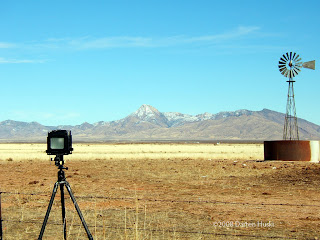 After a morning with nice light on the grassy plains, I drove into Silver City for a plate of Huevos Rancheros. Mighty good.

Then it was off to explore the sights to be found in the area. The big open quality of the open range country kept drawing my interest. As the road got close to some of the mountains, I began to look for ways to work them into the image. This one tall peak stood out, snow clung to it's side. I wanted to get that mountain into an image. I made several compositions that had different elements of grass or fences or roads, but I still had not found it. Then I saw this windmill and tank and knew I had my image. Blue sky, mid-day, and all-this had potential. I thought this might even work in black and white.

Then it was back on the road. There were miles to go.
Posted by Darren Huski at 5:53 PM No comments: 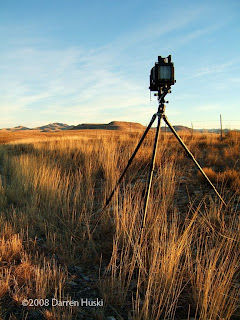 I awoke early on a late winter weekend in El Paso and decided to drive north into New Mexico. Having spent the previous day east of El Paso, I decided to strike out into new territory and make for Silver City and maybe even the Gila National Forest.

I was well north of Deming as the light began to rise in the east. Wide open grasslands stretched out in all directions with distant mountains beyond. Since I did not have a specific destination for sunrise, I decided the open grasslands would be perfect. I turned onto a small side road until I found a nice view with some hills and clouds. Then I went to work to set up the tripod. The view here was nice and there were images to be made. Getting on the road early got me out this far in time for dawn and this is looking like a perfect location. I guess there is some truth to the fact you make your own luck.

I watched the stars fade as the sky turned blue. The clouds picked up some pink light. The grass took on a reddish hue from the light in the clouds. The light kept getting brighter. The clouds turned white. Finally the sun rose and the grass glowed in the early sunlight. I made image after image from the near dark of night to the glory of the first sunlight of the day.

The light filled the sky and I looked around again. Yes, this was a great place. File a note to self to make it back here too. After taking it all in I consulted the map and decided to make for City of Rocks State Park. It was close and rocks in the early light sounded promising.

Posted by Darren Huski at 2:10 PM No comments: 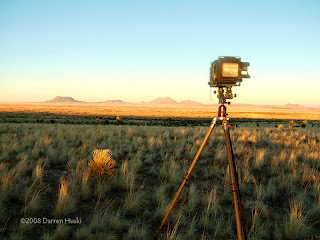 I could not get enough of that big view so after photographing the distant Guadalupes, I turned slightly to pick up the volcanic peaks of the Cornudas Range.

They rise out of the grassy open range country east of El Paso. It is a very different look from the the other ranges out here. Instead of a ridge or spine of peaks, it is individual mountains that have popped out of the grasslands.

It is a series of mountains that draw my eye and my interest. The open range and the individual mountains have limitless possibilities for a photograph.

Of course, this was a severe clear day but as the sun started to set, the light got angular, and the shadows got longer the area began to take on a new life. The light dancing across the tops of the grass and the distant peaks were the image I went for.

I know I'll be back here in search of a sky full of clouds and a big west Texas sunset.
Posted by Darren Huski at 4:56 PM No comments:

All text and images are copyright of Darren Huski.
All rights reserved.